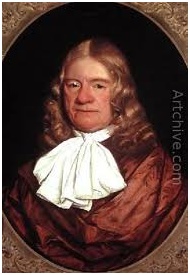 A major battle was fought at Macroom between Cromwell’s forces led by Lord Borghill and those, under the command of Bishop Mac Egan, loyal to King Charles. The Cromwellian forces were victorious, the Bishop was captured and hanged in nearby Carrigadrohid. Six years later Macroom Castle was handed over to Admiral Sir William Penn.  He retired to his Irish estates – the castle and manor 1660, the year of the restoration of the English monarchy. Later under the direction of Charles II Lord Muskerry McCarthy got back Macroom Castle and Admiral Penn received Shanagarry Castle in County Cork in compensation.  Sir William Penn at the restoration of the monarchy he lost these lands and received an estate at Shangarry in 1667 in compensation. This estate amounted to 7,282 acres in the barony of Imokily and 4,859 acres in the barony of Ibane (formely Barry Rue). His son William Penn, a Quaker, founded the state of Pennsylvania in America after spending some time in county Cork in the late 1660s. The Penn estate in County Cork passed into the possession of the Gaskell and Durdin families. 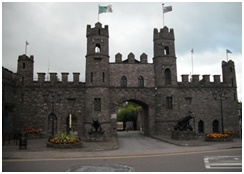 Sir William son is known, of course, as the founder of Pennsylvania. He is also known as a famous Quaker. We must remember that Penn was also a member of the landed gentry, and that despite his true interest in (relative) democracy and religious toleration, he was ‘proprietor’ of his Pennsylvania manor. He was one of the best known early Quakers here who came back in 1666 to manage his father’s estates in east Cork. When Admiral Penn went back to America he was instrumental on that state being a haven for Quakers. Over the next century, some 2,000 Irish Quakers emigrated to America, many of them settling in Philadelphia. 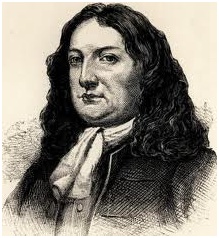