The war of American independence profoundly and dramatically influenced Irish politics. Its independence had a lasting effect on Irish liberal Protestants. Grattan, Ponsoby, Theobold Wolf Tone and Curran became a force in the Irish Parliament and demanded more social justice for the native Irish.  The Society of United Irishmen was founded in Belfast in 1791 by Wolf Tone a young Dublin Protestant Lawyer. Northern Presbyterians who also suffered from religious discrimination, became involved. Apart from skirmishes around the country, the final resulting 1798 rising was confined to Antrim and Down in Northern Ireland and to Co. Wexford (the most south-easterly county in Ireland). The density of the eighteenth-century Protestant presence in North Wexford, dating back to the tenant plantation of the 1620s’ and subsequent migration within the county was central to the rebellion. The Protestants were the leaseholders in the better lands, while most Catholics were in marginal lands, town slums and as labourers on the land of The Marquis of Ely (Loftus family) – who had developed a strong political base. The battle that ensued consisted of burning one other’s houses and churches.  The Catholics found a remarkable leader in Father John Murphy of Boolavogue, who quickly assembled an army of Catholic peasants equipped with muskets and pikes.  The government was slow to react, but the rebels’ attempts to spread the rising to neighbouring counties were halted by defeats at Arklow and New Ross. On 21 June, General Lake stormed the rebel headquarters at Vinegar Hill, near Enniscorthy, and resistance soon ended. Fr. Murphy was later captured and executed. 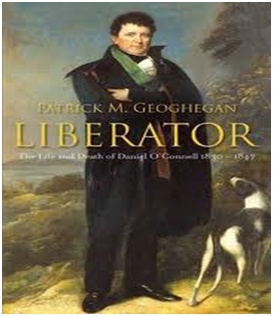 In January 1801 the Irish Parliament was abolished. Even though the Dublin Parliament was solely a Protestant one, the fact that Sr. William Pitt had reneged in his promise of Catholic Emancipation at the time of its abolishment it then became an important issue. Along came Daniel O’Connell from a Catholic Landowning family in Co. Kerry. He was born in 1775, experienced the violence and bloodshed in the French Revolution while being educated in France. With the easing of the Penal Laws O’Connell was allowed study to be a Barrister. He soon became a brilliant and popular Lawyer through-out Ireland. In the days before O’Connell, Catholic leaders were cautious about the way in which they agitated for their rights. They acted as though the Penal Laws were still in force. They protested their loyalty to the King, they petitioned parliament, passed resolutions at meetings and meekly requested the Ascendancy to support their cause.  Through the Catholic Association, which he founded with Richard Lawlor Sheil, the association became the first broadly based, well-organised mass movement in Europe to seek social change by peaceful means. Before this, the violent secret societies were the only recourse the peasants had against injustice. At first the Government was bewildered and did not know how to react to this new force. Soon, they became determined to stamp out what they regarded as a threat to law and order. The Catholic Association was declared illegal, but O’Connell was equal to the crisis. He simply renamed the movement “The New Catholic Association”, and carried on. The Clare election in 1828 was a turning point. O’Connell, with the support of the forty-shilling freeholders(£2), managed a huge victory against the government candidate. He was well supported by the clergy whose influence on the poor uneducated peasant class was enormous. The polling took place in Ennisat the old courthouse where the O’Connell monument now stands. At the final count,

O’Connell was elected by a majority of about eleven hundred votes. The ascendancy party had suffered its first big knock since 1798.

The whole country was aflame. The British Government feared a rising and granted Catholic emancipation in April 1829. The franchise was, however, raised to £10, which excluded the forty-shilling freeholders( The Forty-shilling freeholders were men whose nett income after rent and taxes was at least £2 a year). O’Connell was now the undisputed leader in Ireland and he gave up his practice at the bar to devote his time entirely to politics. At the King’s insistence, O’Connell was not allowed to take his seat until he had been re-elected for Clare. In February 1830, O’Connell became the first Catholic in modern history to sit in the House of Commons. In 1841, O’Connell was elected Lord Mayor of Dublin and in 1843 the subscriptions to his Repeal Association, the Repeal “Rent” came to £48,400. He now began to organise monster meetings throughout the country. It is thought that three-quarters of a million people gathered on the hill of Tara to hear the man they called the “Liberator”. The government became alarmed at the strength of the Repeal Movement and a meeting which O’Connell had planned for 8 October 1843 in Clontarf, Dublin was banned. Huge crowds were already on their way when O’Connell called off the meeting to avoid the risk of violence and bloodshed.

He was charged with conspiracy, arrested and sentenced to a year in jail and a fine of £2,000. The sentence was set aside after O’Connell had been three months in prison. When he was released he continued with his campaign for repeal. However, a turning point had been reached. The tactics that had won emancipation had failed. O’Connell was now almost seventy, his health failing and he had no clear plan for future action. The discontent within the Repeal Association and the Young Irelanders and the Great Famine broke his will power.  O’Connell died in Genoa in 1847 on a pilgrimage to Rome. He was buried in Glasnevin. O’Connell’s Peaceful Means Policy was followed by many world leaders thereafter. 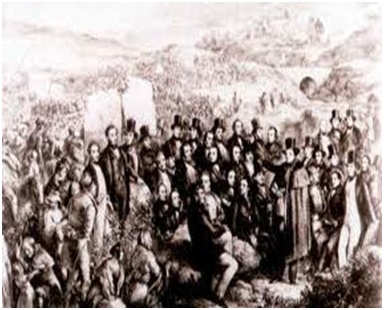