Cecil Woodham-Smith, considered the preeminent authority on the Irish Famine, wrote in The Great Hunger; Ireland 1845-1849 that, “…no issue has provoked so much anger or so embittered relations between the two countries (England and Ireland) as the indisputable fact that huge quantities of food were exported from Ireland to England throughout the period when the people of Ireland were dying of starvation…….Although the potato crop failed, the country was still producing and exporting more than enough grain crops to feed the population. But that was a ‘money crop’ and not a ‘food crop’ and could not be interfered with.” According to John Mitchell “Ireland was actually producing sufficient food, wool and flax, to feed and clothe not nine but eighteen millions of people,” yet a ship sailing into an Irish port during the famine years with a cargo of grain was “sure to meet six ships sailing out with a similar cargo.” Almost throughout the five-year famine, Ireland remained a net exporter of food. Before the famine Ireland’s population had grown to about eight and half million people. Approximately one million died and one million people emigrated during this period.

However the above is too simplistic a reason for the Great Famine.  The First Industrial Revolution had brought mass movement of people from the English countryside to its towns and cities. The people working in the factories wanted cheap food. And so the Corn Laws were put through Westminster in 1846.   For the parliament essentially it was the wrestling of power from the English Corn Growing Landowners. The Corn Laws were an old established expedient for controlling the prices of home – grown corn by taxing (positively or negatively) imports from continental Europe which at all times to the benefit of the English Landlord. Its removal was a massive boost to Canadian and Australian Grain Growers.  Through further mechanization English farmers survived while for Ireland it was back to “the dog and stick” as a large number of leasehold,  and manor farms switched over a large portion of their land to animal production from growing cereals. In most cases they could not compete. Farm labourers bore the brunt as they were made redundant, as far fewer people were required for livestock type farming.

The famine lasted in one part of Ireland or other from 1845 to 1849. Bourke (Central Statistics Office 1959) analysis showed that the potato acreage for 1844 to 1846 were 1.94 million, 2.05 million, and 1.62 million respectively. Bourke goes on to write ‘The potato blythe of 1846 caused the area under potatoes to be untypically low for 1847 at 219,919 statute acres due to the lack of potato seed. By 1848 the potato acreage had recovered to 637,518 acres and by 1854 the area sown exceeded 741,300 acres’.  The death rate did of course rise across the country. Fever followed famine, and because the desperately poor migrated from west to east, and from countryside to towns, it spread across the country. In the east and north, fever was the cause of death rather than starvation. Even in the midlands and south, where death rates were higher, undernourishment exposed the labourers to fever more than to primary starvation.  Its human evidence was borne out in the 1851 census which showed an enlarged population in the towns of the poor areas, in swollen numbers of inmates of the workhouses, and in the large numbers still in receipt of outdoor relief in the poorer parts of the country, such as much of Co Mayo. Robert Peel the British Prime Minister, purchased a £100,000 worth of Indian corn, with a view to selling it cheaply so as to keep prices down. The response was in good faith, but it was brought into the poor communities, that never tasted Indian meal, nor did not generally deal with cash. According to some opinions, the monetarist policy of the British Government of the 1840’s known as “Laissez Faire” demanded no political interference with “the free market”.

No western country had lived for so long a period on a diet so largely dominated by a single crop, in our case the potato. The road to hell may be paved with good intentions, but the path of man’s history and culture seems influenced by the vagaries of chance. This was not the case in pre famine days in Ireland. The Lumper Potato Crop grown in  Co Clare and other western counties was used to slice, and dice the farms, leading to a life of misery, starvation, 1 million deaths, and mass emigration of its people and made millions for Absentee Landlords and their Anglo Irish Agents. It became a topic that the English People never want to remember and the Irish never to forget.

A Postmortem on the Great Famine

To understand the cruelty and the ineptitude displayed by the British Government, and Anglo Irish Landlords with regards to the Great Famine one needs to look at the thinking of the ruling class that prevailed at the time. In Tudor and Stuart England the long established view was that the world had been created for man and that other species were meant to be subordinate to his wishes and needs ………… plants were created for animals and animals for the sake of men. Domestic animals were there to labour, wild ones to be hunted. “Man if we look to final causes, may be regarded as the centre of the world” mused Francis Bacon. Some Divine thoughts that after Judgment Day the world would be annihilated, it had been made to accommodate humanity and would have no further use. Savage beasts were a necessity of God’s wrath, thought James Pilkington, the Elizabethan Bishop. Man’s authority over the natural world was thus virtually unlimited. He might use it as he pleased, said John Day in 1620, ‘for his profit or pleasure’. Inhibitions about the treatment of other species was dispelled by the reminders from pre-Christian times – having a soul – made in the wickedness of God. And so the search for man’s uniqueness over animals was searched for by many western philosophers in mediaeval times. The general consensus was a polarity between animal and man and invariably regarded the animal as the inferior.

Inferior Humans – Robert Gray declared in 1609 that the greater part of the earth was possessed and wrongfully usurped by wild beasts  ……… or brutish savages, which by reason of the Godless ignorance and blasphemous idolatry, are worse than those beasts. The 17th century saw many discourses about the animal nature of the Negroes, and American Indians. Many saw the Irish in a similar manner – ‘in a brutish nasty condition’ said Sir William Petty. General Ireton’s regiment in 1647 is reputed to have seen bodies of men with tails a quarter of a yard long in Ireland. Still more beast like were the poor, ignorant, irreligious, and those living in squalid conditions. Most beastlike of all were those in the margins of society, the mad, and the vagrants. In Cromwellan-Ireland the Tories were frequently compared to ravening wolves. It was against this background that scientists and intellectuals changed the old theories saying in some cases: “those men were no better than animals – possibly even worse …………………. citing some cases that animals did not get drunk or tell lies…etc”. Sir Edward Home FRS (1756-1832) maintained that ‘men excelled other animals only by their superiority of their physical organization’. Darwin in 1871 published the Descent of Man – ‘Intelligence is not unique to man’ he said neither is language nor religion’. And so the debate continued for many years.

In the words of C.H. Connell(Economist) ‘In the eighteenth and early nineteenth centuries it needed no more than observation of the lives of the mass of their fellow men for economists to arrive at a theory of population growth which pointed to the availability of the means of subsistence as the determinant of the size of population”. However, Malthus Theory was driven on cash-based society. For the rural poor in 18th and 19th century Ireland, wages were paid for in kind – an acre of land to grow potatoes at one’s own risk for carrying out everyday work on the landlord’s property. For the Catholic Tenant Farmers – the Penal Laws amendment making it obligatory on Catholic tenants to pay exorbitant rents equal to two thirds of the gross annual output of the land as from 1691 was a further turning the screw of destitute.

In Ireland’s past and in the present day third world this system defies Thomas Malthus’s economic and demographic theory where the people in most cases had/have little or no choice.  For a world galloping towards 9 billion population by 2050 – one wonders if ‘the hairpin twists and turns in the evolution of Ireland’s people’ has given world leaders any better perspective?  The Third World’s present day’s dependence on food production is increasing because of increasing population while the area of land under crops is limited. Since the 1950s when the world population was 3 billion, this increase is being achieved mainly through the use of non renewable resources – fossil fuels, chemical nitrogen, phosphorus and potassium. This is a subject that will be dealt with in more detail later. 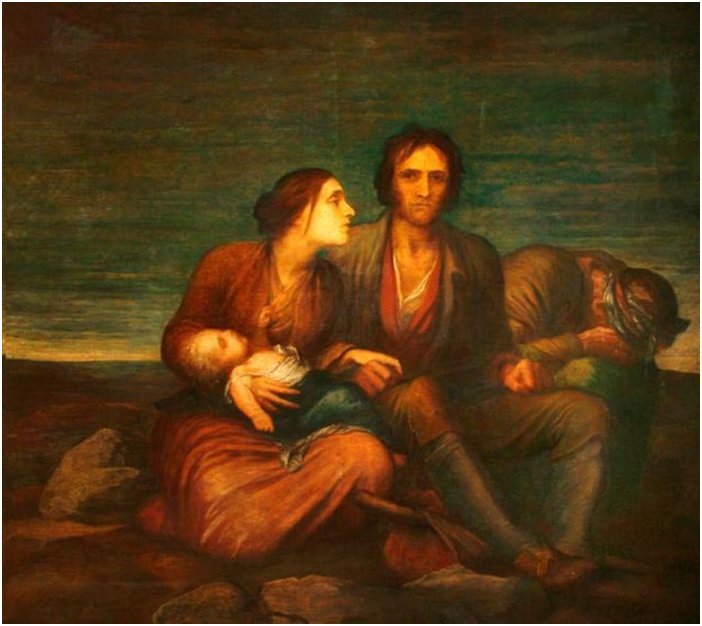