CORK BUTTER MARKET: In early decades of the eighteenth century, butter made in many counties in Munster was being exported through the port of Cork through to an extensive wide network of countries. At that stage it had become one of the most important shipping ports in the world. By 1774, Cork controlled as much as 66% of Irish butter exports to the continent and 80% of that to America. It was the finest natural harbour in the northern hemisphere and the lower-harbour could accommodate the largest transatlantic convoy or a naval squadron. By the end of the seventeenth century, Irish provisions, principally salted beef, butter and pork, had become an important factor in the maintenance of the West Indian plantations. The Cork Butter Exchange was founded in 1770. A ‘Committee of Merchants’ was created in March of 1769 by some 23 exporter of butter which, although it had no statutory powers (and was not to have during the 115 years of its existence), sought to regulate the butter trade. In their view, owing to ‘the visible decay of our butter trade’, combined with ‘the severe losses which attended the adventurers in it’, immediate action was required. The formal market structure which was eventually created out of the firm resolve of these merchants was not, however, an eleventh hour development. It was formed out of strength, and in fact the amount of butter exported from Cork in the years leading up to the establishment of the Committee of Merchants had in fact remained at high levels. Moreover there is no indication that the price of butter had fallen significantly. The requisite changes, it is clear, were needed to tailor their product for the newly opened English market rather than remedy a perceived decline in local standards.

In 1759, Irish butter exporters could now legally export to England, a market which had been excluded for 80 years. Cork butter merchants now began to increasingly look to the English market as a means of assuring their increased profitability. But in order to this they had to find some means of regulating, or at least influencing, the type of butter exported from Cork. This tended to have high salt content owing to the local tradition of producing butter for warmer climates. Heavily-salted butter did not suit English palates, and so by creating a new price structure in which higher prices were given for lightly-salted butter, they attempted to encourage its manufacture and thus have a higher quantity for export to England. In the following six years, Cork Butter Market successfully increased its share of Irish butter exports to England from 18.5 per cent to 34 percent.

This phenomenal success was achieved through the formal market system established by the Committee of Merchants.  It was a market innovation unique to Cork, regulated on a voluntary basis by the committee of Merchants and their salaried staff officers, and was a marvel of its age. Within a year of its establishment they had already put in place a system by which butter could be graded in accordance with its quality. The Committee were, as G.B. Gibson, the Cork historian, described in 1861, ‘a highly respectable body’. But as self-appointed guardians of the Cork international trade, their principal institutional success was the Cork Butter Market.

However, not all the city’s butter merchants were in favour of this scheme, ………………..The grading system, though innovative, could only be as effective as the body administering it. The committee nevertheless had the most important business people on the Committee and as from 1820 the committee offered representation to important large farmer ‘country gentlemen’ producers.

In the meanwhile small dairy farmers from far West Cork, Kerry and limerick, brought their ‘Firkins of butter’ by horse and cart to the Cork Butter Exchange. It became a twenty four hour market. The feat of travelling through the night for the farmer, was a one of endurance and in eighteenth and nineteenth centuries would have been considered unpleasant even by the standards of the time. With the advent of railways, the lot of the small farmer was greatly alleviated; but long journeys by road were still unavoidable. The Butter Road running from East Co Kerry to Cork city continued to be used. 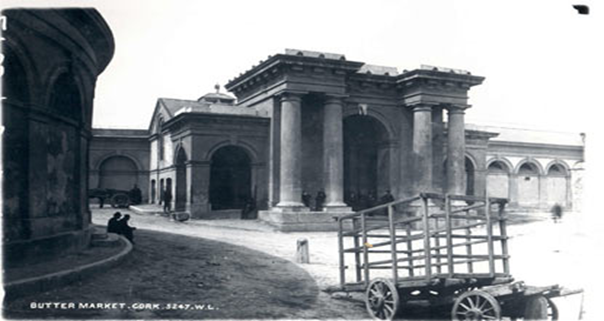 During the post-famine period, Ireland was still the principal exporter of salted butter to Britain. The Cork Butter market was the leading centre for this trade, being the outlet for the butter produced in Munster.  By 1870s’ the position of Irish butter export was eroded by European competition. Non-Irish butter exports to Britain increased from 1,159,210 cwt (57,960 tons) in 1870  to 2,326,305 cwt(116,315  tons) in 1880. The continentals had a lower salt content than the Irish butter, and this butter was sold in a variety of packages, in contrast to the old fashioned oak firkin to store Irish butter. By the late 1870s’ the French exported machine-blended butter and by the early 1880s’ the production of butter by centrifugal separation in centralised factories, known as creameries commenced in Denmark.

In 1884, control of the Cork Butter Market, the largest in the world, was transferred from the Committee of Merchants to a new Trustees. The trustees faced herculean task in restoring the position of the Cork Market in the midst of a period of fundamental change in the butter industry, both in Ireland and abroad. This drop in sales was a result of the collapse of the firkin export trade to Britain. This type presentation in packets, suitable for sale, and with less salt began to dominate the trade. In Ireland production methods were still primitive and the marketing system if it could be called, was deplorable. The following is a contemporary account from a Patrick O’Shea of Glengarriff (West Co. Cork) from a Prize winning Essay in the Munster Feis 1902: The publican at the cross roads will give a place in house to the butter-buyer to put his scales. Perhaps it is in the stables he would get it, and even if it is, doubtless it is in the public-house he will pay for the butter. The men of the parish will collect around him with a week’s butter. He will welcome them, he will praise the butter, he will praise the women, he will give the highest price to each of them. He will find no fault with greasy butter, nor with ribbed butter…………He will stand them a drink at his cost – the open-handed man- and he will take leave of them at the shop counter, where they will have another drink or two as a compliment to the publican who gave them the use of the house. Indeed it ………………..going home after that half drunk, praising the buyer who gave them all ‘top prices’ and none of thinking that they got the price of the smoky butter…………….and I need not say there was no co-operation……….and no communications’ sic with the Butter Exchange, with London or Liverpool Merchants nor visa versa. Meanwhile back in the Butter Exchange, the Trustees sought to reduce the salt content of the butter. They recommended 5 lbs of salt per firkin for ordinary cure and half the amount of salt for the mild cure. Despite a further reduction the salt content and promoting further sales of mild cure, in 1909 the Head Inspector of the Market considered the butter was too salty for the British consumer. Problems in particular arose in relation to persuading the farmers to put the new standards into practice. Putting the butter in Butter Boxes rather than firkin gave some positive results. A date brand followed. Excess moisture in the butter became a problem. The moisture content was reduced from 22 per cent to 16 per cent. Much of this butter was now produced with a hand separator and their use became widespread in Munster as from the 1890s. Besides as from the 1880s’ centralised butter making was now beginning to take off in the new co-op creameries in Ireland, but had really taken off in Europe. Possibly the first creamery in Ireland (with separators) to serve a number of farmers was the Midleton Dairy Company, Co. Cork, promoted and planned by Penrose Fitzgerald, which started operations 1882. Others followed in Hospital and Galbally Co. Limerick in 1884. Thereafter progress accelerated, particularly from 1887 onwards. With the separator and a power driven-barrel churn, these creameries were turning out an article superior to the average farm butter, and with much less trouble for the farmer’s wife. It was the demise of Cork Butter Exchange and the First World War accelerated the decline. To quote Raymond Ryan in his Cork Historical & Archaeological Society paper 2002, ‘By the 1920s, the Cork Butter Market was an economic anachronism, and the attempts by them to revive legal control of the butter trade in Cork showed how out of touch they were with modern economic life’.