Isaac Butt (1815-79) the son of a Church of Ireland clergyman became converted to the Irish national cause after witnessing the terrible sufferings of the famine victims. His earlier education was at Midleton College, Co. Cork. After Trinity University he became the leading barrister of the age and also a member of parliament. Although a Protestant and a Unionist he willingly defended Fenian prisoners arising from armed struggle.  Gradually he came to believe that an armed insurrection would never succeed and that the only hope for Ireland was to obtain her own parliament. In 1870 he said: “I have long since had the conviction that it is equally essential to the safety of England, and to the happiness and tranquility of Ireland, that the rights of self-government should be restored”. It was to this end that he founded the Home Rule Association in 1870. Its principal aim was to establish an Irish Parliament with full control over domestic affairs. To begin with, the movement did not receive much support, but by 1874 – when there was a general election – Butt’s Home Rule Party had won more than half the Irish seats in Westminster. This victory was due in no small way to the Ballot Act of 1872, whereby all voting was now in secret. But he was not able to make much impression within parliament. Obviously other members of the House of Commons were not going to be won over that easily. Joseph Biggar and John O’Connor-Power of Butt’s party felt other tactics should be used they proceeded to obstruct the business of the house by speaking for hours and keeping members sitting all night. Isaac Butt did not approve of these tactics. There was division in the ranks of the party. This obstructionist policy was typical of Fenianism. Butt was finally ousted from the leadership and he died soon afterwards in 1879. Biggar and O’Connor-Power were joined by a young and highly successful obstructionist Charles Stewart Parnell. 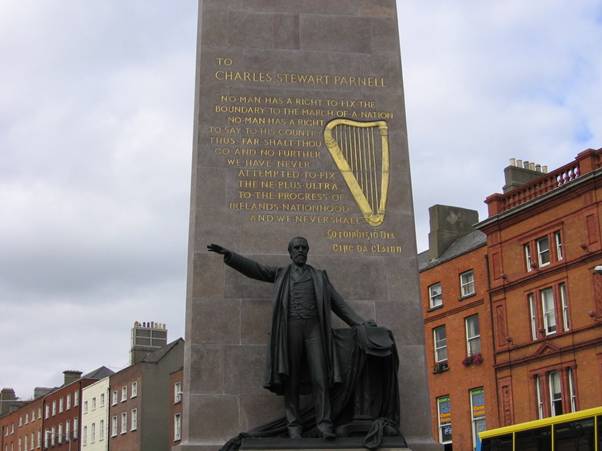 Parnell, born in 1845 owned 4,678 acres at Avonadale, Co. Wicklow and like Butt was a Protestant. He had inherited deep dislike of England from his father and his American mother, Delia Stewart. He became leader of the Home Rule Party some four years after being first elected. He dominated Irish public life from 1879 to 1891 and was hero of both rich and poor. On another front along came Michael Davitt born in 1846 at Straide, Co. Mayo, the son of a Catholic small farmer who was evicted in 1852 for non-payment of rent. The family immigrated to Lancashire, where Michael worked a twelve hour day in a Cotton mill. In 1857 he lost his right arm in a machine and this led to his getting employment by the local postmaster. At the same time he was given some schooling and he proved an intelligent and keen scholar. He joined the local Fenian group in 1867 and took part in the Chester Castle raid in the same year, but it was some three years later before he was arrested and sentenced to fifteen years penal servitude. After the failure of the Fenian armed movement, it seemed that the cause of Irish freedom was lost forever. Davitt was released from penal servitude after seven years on ‘ticket-of-leave’ in December 1877.  His jailing in fact increased his passion for social justice in Ireland. Having spent a short time in Ireland, Davitt went to America, where he met John Devoy, the principal whip in the America Fenian movement. Davitt toured all over America, and addressed meetings of Irishmen. He returned to Ireland determined to do something, assured of the support of the Irish Americans. With the help of some local Fenians, he organized a mass demonstration at Irishtown Co. Mayo, in April 1879. The meeting was a great success, with about 15,000 people present and 500 green-bannered horsemen. Davitt realized that he could achieve very little on his own. This led him to form an alliance with Parnell on the one hand and the American Clan na Gael on the other. This alliance between Davitt the land reformer, Parnell the home rule agitator and Devoy the republican became known as the ‘New Departure’. It was the yearning of Irishmen everywhere to unite their forces and bring about political revolution. The political side of the New Departure had to take second place, as the land situation became worse.

The unrest was general in 1879-1880; the coincidence of unrest among small holders and among larger farmers provided the basis of a powerful political movement. The year 1879 stands out as a time when nearly another famine afflicted most of Ireland. The main reasons why famine nearly came to the country once again were: repeated bad harvest from exceptionally bad weather during the years 1878-1879; the sharp fall in the price of grain all over Europe, caused by the arrival of cheap American wheat on the market; the failure of Irish landlords to help their tenants in the crisis; the bankruptcy, starvation and eviction which hung over so many tenant farmers, especially in the West of Ireland; the lack of alternative work in Ireland for those who could not obtain a living on the land. There followed a spate of eviction, the number rising from one thousand in 1878 to over five thousand by 1882. However, the strength of the Irish tenants was about to challenge the Landlord system.