The fact that Charles Stewart Parnell was prepared to throw in his lot with Davitt’s land movement showed him in a new light. He was now able to play the role of popular orator and to make deep impact upon the minds and hearts of the Irish country people. At a mass meeting in Westport on June 8 1879 he spoke the following memorable words: “You must show the landlords that you intend to hold a firm grip on your homesteads and lands….. You must help yourselves, and the public opinion of the world will stand by you and support you in your struggle to defend your homesteads”  The gauntlet had been thrown down and the whole issue was clinched when Davitt founded the Irish National Land League, with Parnell as its first president, on 21 October 1879.

The objects of the League were:

<![if !supportLists]>2.      <![endif]>To effect such radical change in the land system of Ireland as would put it in the power of every Irish farmer to become owner, on fair terms of the land he tilled.

The Land League publicized the evils and the injustices of the Irish land system, they provided assistance for the evicted and helpless by building Land League huts and distributing money which had come mainly from America, they kept the people informed of their policy, which was to force out the landlords and give the land to the people. In April 1880 a general election was held, and Parnell found himself at the head of a powerful group at Whitehall, who were united in their aim to achieve justice for Irish tenant farmers. Gladstone, the Liberal leader, became Prime Minister and was prepared to introduce a new land bill. But in the meantime the land war continued in Ireland and it reached its most significant point when Captain Boycott, of Lough Mask House, Co. Mayo defied the League. Captain Charles Cunningham Boycott was an unpopular English landlord who moved to the Ballinrobe area in 1873 after an inheritance allowed him to take a thirty-one year lease on three hundred acres near Lough Mask. He also became an agent on the nearly one thousand five hundred acres estate of Lord Erne. There were 38 small tenant farmers on Lord Erne’s estates near Lough Mask and Castlebar. In September 1880, he and his family were reduced to a state of helplessness and found themselves cut off from their neighbours by the boycott- system, which Davitt and Parnell to a lesser degree had approved.  Certainly Parnell was in sympathy of such an attitude towards those who refused to cooperate with the Land League. On the 19 September 1880, he spoke to a large crowd at Ennis Co. Clare: When a man takes a farm from which another has been evicted, you must shun him on the roadside when you meet him, you shun in the street of the town, you shun him at the shop counter, you must shun him in the fair and in the market-place, and even in the House of Worship, by leaving him severely alone, by putting him into a moral Coventry, by isolating him from the rest of his kind as if he was a leper of old-you must show him your detestation  of the crime he has committed.  …….  By this ‘boycotting’, and other methods, the Irish farmers stood up to the landlords. 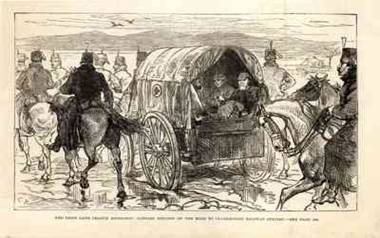 Captain Boycott and family being escorted out of Ballinrobe by the Constabulary on his way back to England after being ‘boycotted’ by the people.

The Government, although it had to admit that the Land League was a lawful organization, could not allow civil war to develop in Ireland. Gladstone was therefore forced to apply to parliament for exceptional powers under which he hoped to put an end to the Land League. He got Davitt and Parnell arrested in February 1881 and placed in Kilmaiham jail. The land war continued and the state of the country was described as follows by one writer, Barry O’Brien: “It rained evictions, it rained outrages, tenants who paid unjust rents, or took farms from which others had been evicted, were dragged out of their beds, assaulted ……… Graves were dug before the doors of the evicting landlords; murder was committed. A reign of terror has in truth commenced”.  Gladstone got the Land Act passed in 1881, as the Land Bill that got introduced in 1870 was completely ignored by the landlords. It guaranteed Three Fs: fair rent, free sale, and fixity of tenure to the Irish farmers, while at the same time Land Courts to fix rents. Though Gladstone was genuinely determined to provide a solution, his 1881 Act did not get to the root of the trouble. No provision was made for tenants unable to pay arrears of rent, and no guidance was given regarding what was a fair rent. In fact the land war continued and crime increased through-out the country. Gladstone was forced to introduce a new coercion Act after the new Chief Secretary Lord Frederick Cavendish and T.H. Burke Under Secretary were assassinated in the Phoenix Park. The Settling of the Land Question was still to the forefront. It was aimed to provide a system whereby the tenants could buy out their land. The Irish farmers had no money for such a takeover; it would have to come from the state. In 1885, a conservative government passed the Ashbourne Land Act, by which £5 million was made available by way of loans from the Land Commission to the tenant farmers. This sum was found to be too small and in 1891 a further sum of £30 million was given. Finally, by the Wyndham Act of 1903 the sum of £100 million was put forward, while at the same time they gave £12 million to the landlords by way of compensation.

The land war changed the face of rural Ireland, by putting an end to the old landlordism, and turning Ireland into a land of peasant owners. Davitt’s dream of the Irish farmer owning his own plot of land was fulfilled. Charles Stewart Parnell died at forty five years of age in November 1891 and like O’Connell has not been forgotten by the middle class farm owners in Ireland. However, his main aim Like Butt’s was that of Home Rule was not granted, even though Gladstone was quite favourably disposed to a Commonwealth status for Ireland. It had to wait for an armed struggle.