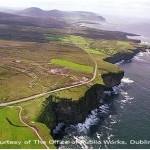 The first people of the Mesolithic Stone Age arrived sometime after 7,000 BC. By this time the country had a canopy of trees through-out. Willow was the first important producer of pollen along with the juniper and then both of these trees were quickly shaded out by the expansion of of the birch woods. Pollen […] 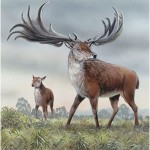 An artist’s impression of the Giant Deer and young, which the first people who came to Ireland (The Mesolithic People)  ~ 7,000BC.  Though huge the antlers were frail and for show rather than combat. Giant Irish Deer is believed to have roamed the lowlands of central and eastern Ireland, weighing up to 800-1000 […]