The whole business of agriculture in the countryside is founded upon the soil; for the soil the farmer pays a rent, and upon his skill in making use of its inherent capacity depends the return he gets for his crops. Of course rent or capital cost of land is also dependent on the proximity of a market and the adaptability for a particular crop: the light sandy soil of north Co. Dublin are ideal for early potato and vegetable growing but would not be very suitable for general farming. A clear distinction must be made between soil as material and as a natural body or individual. When we study soil as a material, we try to find out how the complex substance is made up and to learn something of its physical and chemical properties. But even if we have succeeded in this enquiry, we are still far from understanding the soil as it occurs in the field or forest and as it is related to the growth of crops and trees. Thus we are led to study soils as individuals. Thus we distinguish soil, the material, and soil which is a natural body. The difference in approach is analogous to the difference between plant or animal materials and studying plants and animals as living individuals. The individuality of a soil become clear if we open up a trench or a cutting in the soil, we see a statifieds arrangement of soil and sub soil layers, passing down to the raw material, gravel, sand clay, or weathered rock, from which the soil has been derived. The succession of layers or horizons down to the raw parent material is called the soil profile. This is the individual soil and this is the ultimate basis of the soils classification.

The complete knowledge of the soil and the part it plays in the nutrition of the plant requires investigation along three lines, which may be roughly classed as – chemical, physical, or mechanical and biological. In the first place we know that the plant derives certain substances to its development from the soil: nitrogen and all the ash constituents reach the plant in this manner. Besides Nitrogen, Phosphorus and Potassium are two critical major elements required. While on the other hand Magneium, Manganese, Copper, Cobalt amongst others can be critical for crop and animal yield and health. Different parts of the country have been shown through Irish Agricultural Research surveys for difficiencies or sometimes excess of some elements.

The soil is however, not merely a storehouse of food for the plant, since water is equally indispensable to its existence and is immedeiately derived from the soil through the plant roots. In Ireland the problem is generally one of excess rainfall particularly in the Western seaboard. Eastern part of the country with 750mm of rainfall per annum is the most adaptable for crop production. While the wetern part with rainafall up to 2000mm and at least two days raining means that soils in general do not have adequate time for the water t drain through. This results in high organic matter, leading to a peaty layer in the extremes. 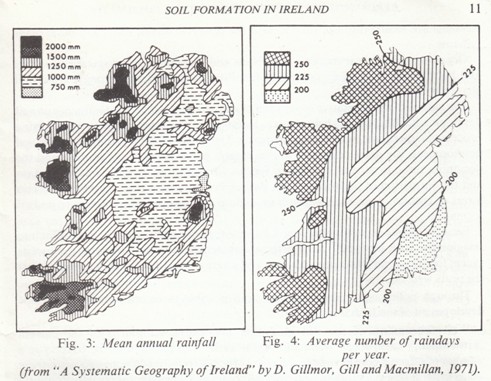 Also the the texture of the soil and the proportions of water and air it retains, affect its temperature and the reposiveness to change of season which is roughly indicates by the term “early” or “late”  soils. The general consideation of these questions may be termed soil physics.

Finally, the soil is not dead mass, receiving on one hand manure and fertilizer, which it yields again to the crop by purely mechanical or chemical processes, it is rather busy and complex labaortory where a multitude of minute organisms are always at work. By the action of some of these organisms vegetable residues and manures are brought, we might almost say digested, to a condition in which they will serve as food for plants; others are capable of bringing into combination, or “fixing”, the free nitrogen gas of the atmosphere, and therefore add directly to the capital of the soil; others agin are noxious or destructive to the food stores in the soil.  Andre Voisin the very famous Normandy Veterinary Professor and farmer aptly summaries the situation regarding soils in his book “Soils Grass and Cancer”, where he wrote “Remember that you are dust “the dust” of our cells is the dust of the soil. We should frequently meditate on the words of Ash Wednesday; “Man remember you are dust and that you will return to dust” That is not merely a religious and philosophical doctrine but a scientific truth which should be engraved above the entrance to every Faculty of Medicine throughout the world. We might then better remember that our cells are made up of the mineral elements which are to be found at any given moment in the soil of Normandy, Yorkshire or Australia; and if these “dusts” have been wrongly assembled in the plant, animal or human cells the result will be imperfect functioning of the latter.

Outline map to show the distribution of leading soil types in Ireland today. Poorly drained soils predominate in the north and west. The more fertile soils occur in the south – east. 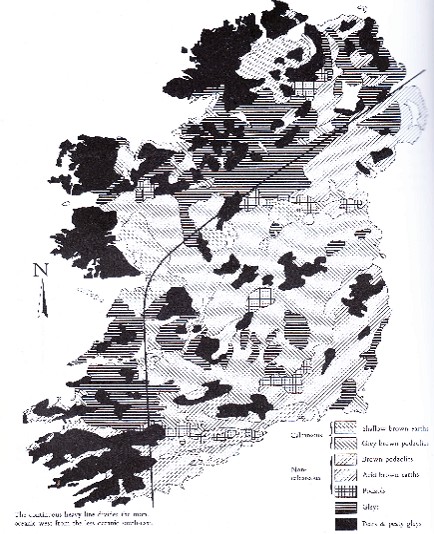 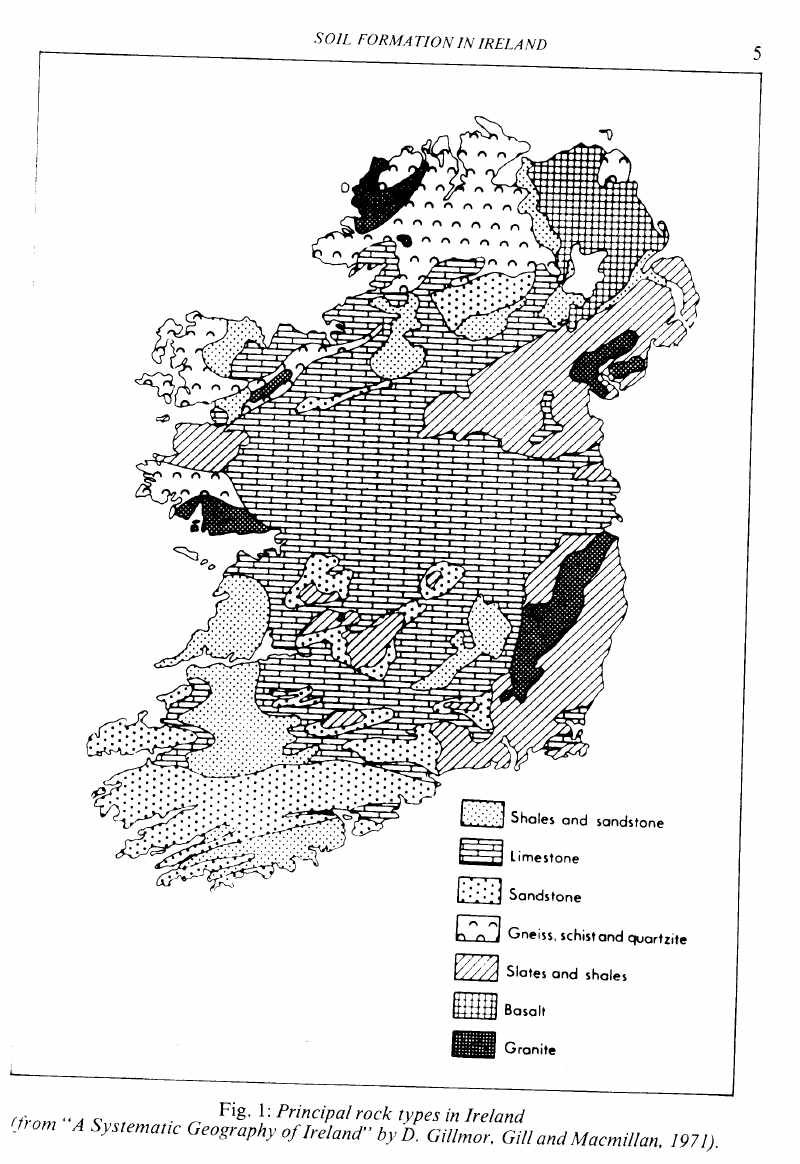 Although Precambian rocks dating back to more than 2000 million years have been identified in coastal sections at Rosslare and Kilmore Quay in Wexford, the most extensive older rock formations in the country are represented by those of the lower Palaeozoic and the youngest (60 million years ago) by those of the Tertiary Period. The Palaeozoic era consists of Cambrian, Ordovician and Silurian rocks (mainly shales). They are usually metamorphosed and trend in a south-westerly direction. END_OF_DOCUMENT_TOKEN_TO_BE_REPLACED